I got my love of football from my mother.

Our family was never the sort to make big public displays of this affection – bumper stickers, porch banners, or Bowl parties – but the weekend double-header was a ritual in our house.

A lifelong Giants fan, she’d knit while the athletes collided on the field and homemade pizza cooked in the kitchen; young-me was happy stuff my face and watch whoever was playing on any given Sunday.

I carried on this tradition (minus the yarn) after I moved away for university and work, and we continued it when I moved back to start this company and take care of her following her second cancer diagnosis.

Always encouraging, she was just as thrilled as I was when the call came from EA Tiburon to visit Orlando and contribute to this year’s Face of the Franchise career story mode, Rise to Fame.

Following the player’s cinematic journey through high school and college, their custom-made character will be drafted by an NFL team and begin a series of branching, choice- and performance-based narrative scenarios that will take them from rookie year up to potential induction into the Hall of Fame.

I worked alongside a team of unbelievably talented, driven, and funny directors, producers, designers, tech programmers, and writers as we brainstormed, prototyped, and tested what felt more like an adventure game than a football sim.

But that’s the thing: football is ripe for drama. It’s fertile ground for stories about rises, rivalries, and redemptions that can span anywhere from a single game to multiple seasons, a player’s career, or even decades of a team’s history. Before every snap is a reservoir of potential energy – a mix of positions, practice, and personalities, of in-the-moment on-field tactics and carefully-planned off-field strategies – just waiting for its brief, explosive transformation into movement and contact.

There are championships to claim and records to break. There may not be any dragons to slay, but stat-wise football can go head-to-head with any high-fantasy RPG… and in this case the characters are real-life super-humans. Of all ages, ethnicities, backgrounds, and body types.

And alignments. Because, c’mon, when was the last time you saw a knight trash-talk their vanquished opponent at a post-siege press conference?

Madden’s annual release schedule meant a tight production timeline. Creating a quality game in a few years is an amazing feat; doing it in mere months is a miracle. We relied on fast iteration and frequent reviews; flexibility was essential, since we were writing and designing while the systems and assets were still in development.

Then the pandemic hit.

It threw a new challenge into the development as a massive, multi-hundred-person effort pivoted from tight collaboration in an enormous office to working from home in a matter of weeks. The team rose to meet it.

It was a struggle to deliver while also providing the necessary care. I could not be more grateful to my colleagues for their support and understanding.

I wrapped on the project at the end of March.

She died at the beginning of April.

This has been a hard post to write without crying (and I have… a lot). It’s about the game’s release, sure, but it’s difficult not to also remember the past few months, recount everything that’s happened, and relive the stratospheric joys and abyssal sorrows.

I don’t know what the future holds.

I don’t know what my life will be like now that both of my parents are gone.

I don’t know what shape the upcoming NFL season (if there is one) will take.

I don’t even know how the game ultimately turned out; it’s installing now, but I’ve only previously played it as spreadsheet scripts and UX flowcharts.

This may be the only opportunity fans and players get to hear the crash of the pads and the roar of the crowds for the next year or more. I’m incredibly proud of what we made. I hope she would be, too.

This one’s for you, Mom. 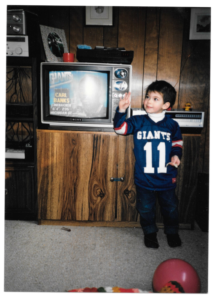 Madden NFL 21 is out today for PlayStation 4, Xbox One, and PC. It will be available for next-gen consoles when the hardware is launched later this year; those who purchase it on current systems are entitled to a free upgrade. For more info, check out the official site – https://www.ea.com/games/madden-nfl/madden-nfl-21 – and watch the trailer below.