Today’s the day the church bells ring and the doors open to welcome the congregation. The Church in the Darkness is out now for PC/Mac, Xbox One, PlayStation 4, and Switch!

Last week I wrote about the impending release and the reviews have already started to trickle in. Adam Rosenberg at Mashable says…

The Church in the Darkness does a great job of delivering a sticky stealth and exploration experience that also gets your brain moving.

The Church in the Darkness almost serves as a history lesson, making one of the most shocking headlines of the ‘70s into a noteworthy interactive experience.

When you’re ready to hear the Walkers’ message and decide whether they preach the truth or are leading the flock astray, head over to the game’s official site — http://paranoidproductions.com/church — to learn more or get your copy.

And don’t forget, there’s a 20% discount on all platforms during launch week.

After several years in development, I’m pleased to announce that The Church in the Darkness will be launching simultaneously on PC/Mac, Xbox One, and PlayStation 4 next Friday. What’s more, the news has finally broken that the game will also arrive on Nintendo Switch the same day.

I’ll be honest: I have a strong bias toward this project, and have helped with its development as well as with showing it off at expos (which I’ve written about before). Its creator, Richard Rouse III, is a good friend and former colleague of mine.

But more than that, it’s an experience about a time and place in our history — one of intense civil disruption — that few other games even attempt to seriously explore. Its narrative permutations mean the characters aren’t always a group of fanatics or maniacs, but average people with wants and desires, either optimistic or cynical about the state of the world and their place in it. I believe these attitudes and contrasts are well reflected in the trailer embedded below.

Combined with the action-infiltration gameplay, player choice, and multiple objectives, each session can result in a variety of different outcomes. Unlike the popular conception of separatist socialist utopias in the 1970s, things don’t always have to end in tragedy.

I encourage you to check it out, and there are many ways you can do that:

During launch week all platforms will be 20% off, meaning you can get the game for $15.99 (regular $19.99). Or pick up the True Believer special edition on Steam, which includes the 28-song soundtrack and behind-the-scenes videos.

For more, visit the game’s official website — http://paranoidproductions.com/church/index.html — or watch the launch trailer below.

One of the things that made showing The Church in the Darkness at this year’s PAX unique from previous ones was the persona of “Chip” James; the idea that given the era the game is set in and all the seemingly outrageous things happening at the time, it might be fun to demo in character.

The game’s creative director, Richard Rouse III, was cool with it, so I committed — full costume, fake press pass… hell, I even shaved my beard into a horseshoe moustache.

But the part I was looking forward to the most was taking photographs around the booth. People playing, chatting, observing, whatever. I used to be an avid black-and-white shooter, and this was an awesome (and period-appropriate) excuse to get back into it. So I dug out my Nikon and a couple prime lenses, loaded up a few rolls of Tri-X 400, and went to work.

Film photography is very different than digitally or with a phone, but it all came flowing back:

You still want to be quick to capture the moment, but you can’t machine-gun your frames because you only have thirty-six.

You have to pre- or re-set settings quickly for different lighting — and, despite the pomp and pageantry of the expo hall, it was actually rather dark inside.

There is no auto-focus, so you do your best to line everything up before pressing the shutter. You fall into a stance, a breathing pattern, and it becomes almost a focused, meditative experience.

When all was said and done, I took the rolls to be developed by one of the few places that still does it (thanks Luster Photo) and can now share the results, which I’m quite happy with.

Here’s hoping the opportunity to do this again comes along in the future. Enjoy!

P.S. If you want to follow the game’s coverage of PAX and future events, head over to the official development blog.

Demoing with new and returning players, talking with and performing for attendees, and seeing beautiful friendly and familiar faces have made these past four days an utter delight.

Thanks to all of you who asked questions, picked up a controller, and attempted to sneak into the commune (successfully or otherwise); special thanks to those who tried the “One Shot, One Life” challenge (either once or repeatedly), signed up for the newsletter, or pre-ordered the game.

And finally enormous gratitude goes to the Indie MEGABOOTH organziers, PAX Enforcers, and fellow developers who routinely came by to make sure we were well taken care of (both physically and emotionally).

There will be additional info here on The Church in the Darkness as it prepares to launch later this year, so stay tuned. And there may be one more update in the coming days with a special surprise from the show floor.

Now if you’ll excuse me, I need to get some sleep. Feet are sore from the hard hall tiles, body’s tired from the booth break down and long drive back, but my mind is full of post-expo excitement that’s going to yield some sweet dreams. G’night!

Good mornin’, Beantown — the PAX East 2019 expo is about to start and The Church in the Darkness is ready to welcome players and parishoners alike with open arms.

We’re set up in the Indie MEGABOOTH — #20 on the map below — with three demo stations and more decor than you can shake a fern frond at.

The “One Shot, One Life” challenge makes its return this year, but with a new set of rules — speak with with one the game’s representatives to learn more or try your hand at this test of stealth skills.

If you’re feeling truly zealous, you can pre-order the game on the show floor — not only will you get instant access to the itch.io version, but also a devotional card signed by Ellen McLain and John Patrick Lowrie, the excellent actors who voice the two preachers. Check the official Twitter account for pics and additional info.

And keep an eye out for “Chip” James, a gonzo photojournalist who’s just returned from Battuela, the country where Freedom Town is located; he’s brought back some wild stories and a few extra rolls of 35mm film… 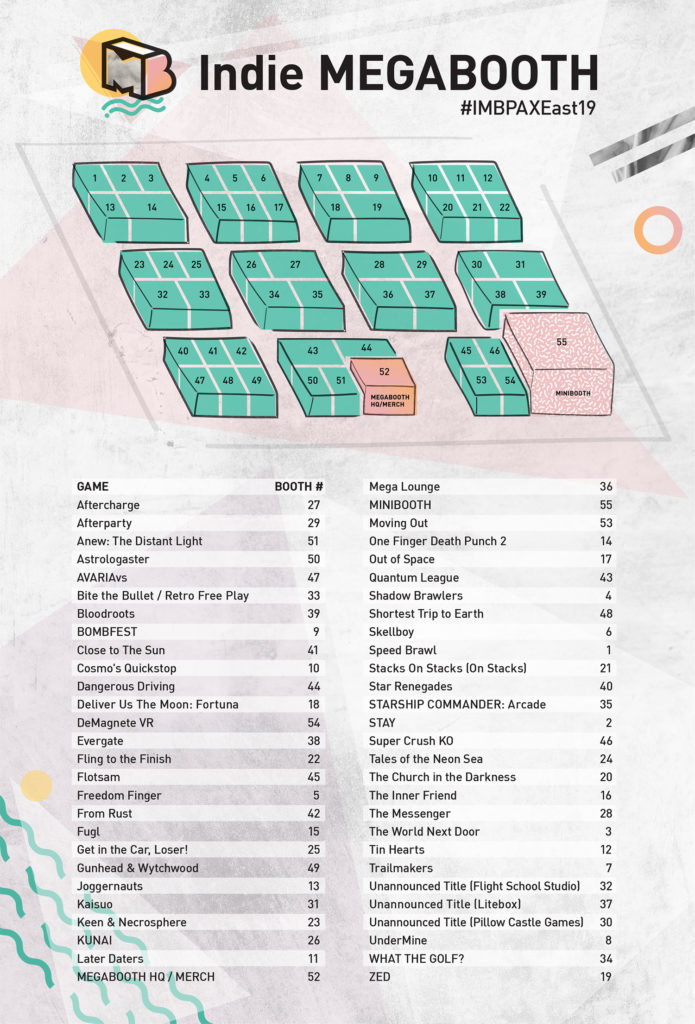 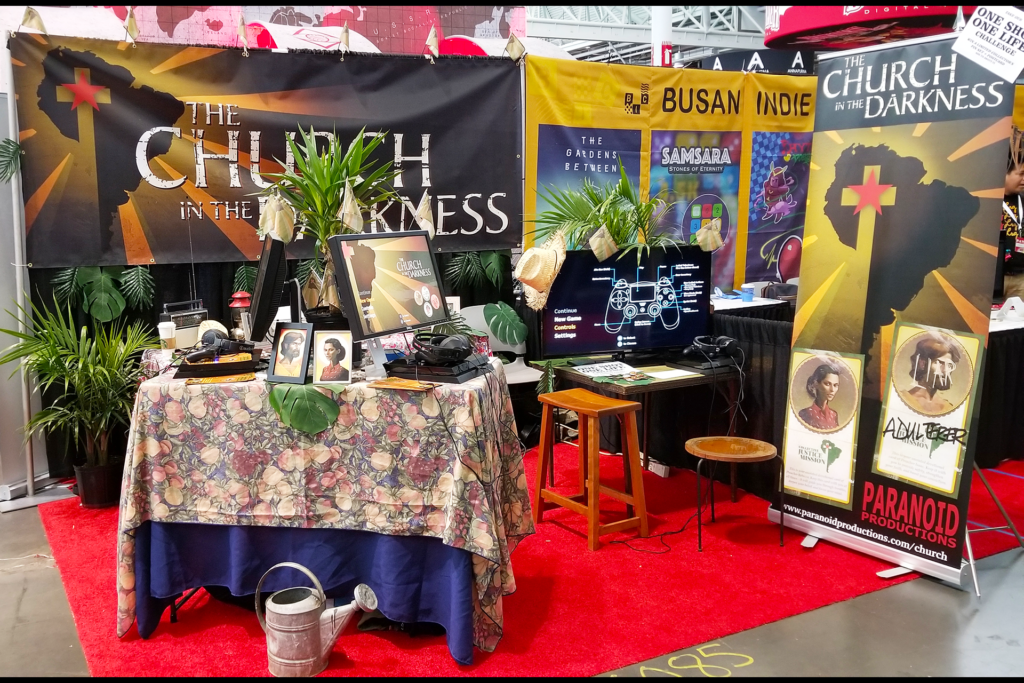